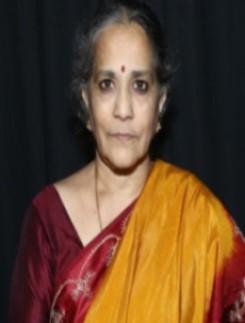 Smt. H.S.Rathna is the 3rd Daughter of H.S.Srikantayya who was working in advocate's office as manager at Mysore. He was the staunch lover of classical music. He was attending all the programs organized at Mysore on various occasions. For all the programs Smt. H.S Rathna was accompanying her father and developed keen interest in music. After the completion of Degree at Maharani's College Mysore , H.S.Rathna pursued her music learning from Vidhusi Smt. Seetha Lakshamma and completed her senior exam . After that , she learnt Veena from Smt. Padma, an AIR artist from Mysore. After the marriage she continued her music journey with Veena Vidwan Nanjunda Swamy. There she learnt the spiritual chantings Vishnu SahasraNama, Lalitha Saahasranam & Sowndharya Lahari. With the retirement of her husband, she has settled in Bangalore and serving SRI VIVEKANANDA KALAKENDRA as President. She is teaching Music & Soundhaya Lahari at her own Residence to the poor and needy music lovers. 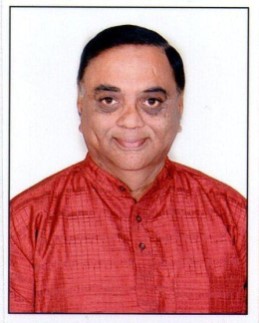 Dr. Sri V.Nagaraj completed his Post Graduation in 1972 and started his career as Lecturer in B M Shetty First grade college, Konanur. Later on he completed his B.Ed & M.Ed in RV Teachers College and worked in many Educational Institutions as cultural & Educational Coordinator and in different capacities. He is a staunch devotee of Ramakrishna Math and Ramakrishna Mission. Inspired by the teachings of Swami Vivekananda with a mission & vision and with a burning desire to serve the society, under the guidance of Ramakrishna Mission monks, he with a few of his devoted friends, started the organization SRI VIVEKANANDA KALAKENDRA in 1972. With Revered Swami Purushothamanandaji Maharaj, he has conducted more than 1500 spiritual retreats, seminars, workshops on different topics and personality & skill development in different Educational Institutions and motivated the students to serve society. Later on to keep the sustained interest among youngsters he started Cultural and Social Activities like Music, Dance, Yoga, Environmental Awareness, Free Lecture Classes and Seva Activities. The main AIM of the institution is to promote our rich Cultural Heritage, the spirit of patriotism and Swamy Vivekananda's Teachings through value based cultural Programs. With this intention, he has produced more than 65 Dance Ballets on various themes and travelled throughout India to make the Cultural awareness Project successful. Recognizing the institution's involvement in Socio-Cultural activities, Govt. of Karnataka honored the Institution with the most prestigious Rajyothsava Award' in the year 2000. Subsequently BBMP (Bruth Bengaluru Mahanagara Palike) awarded the 'Kempegowda Award' in 2015 and Aryabhata Organization gave 'Aryabhata Award' in 2013. 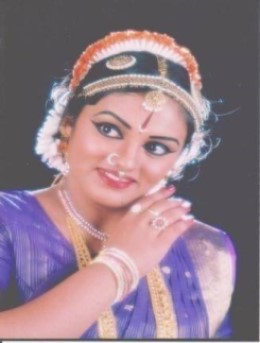 Smt. Dr. Swetha.N is the proud daughter of Sri.V.Nagaraj, Founder & Hon. Secretary of Sri Vivekananda Kalakendra and Smt. M.K.Jayashree, a renowned sugama sangeetha singer. She started her education career in Kumaran's School, continued her studies in R V College, got her MBA degree from Bangalore University and awarded Ph.D Degree in the area of Business Management from Mysore University. Along with her studies, she pursued her Bharathanatyam from famous dance teacher Smt. Narmada, who was the Natyarani Shanthala awardee from Karnataka State Government. She completed her Vidwath in Dance and did Ranga Pravesha in 2002. She has given more than 5000 stage shows travelling with her team throughout the country. With her wonderful performances she has won the hearts of all including the President of India, Governors of Karnataka, and CMs of Karnataka. She has trained more than 10,000 students in dance and abhinaya. She is a good singer too. After working for 14 years in different colleges, now she is working as Asst. Professor at Jain Deemed to be University, Bangalore. She is the backbone of Sri Vivekananda Kalakendra. She is actively involving herself in all cultural and social activities of the Kendra supporting her parents and upbringing her young son Daivik in both cultural and educational fields. Recognizing her services Aryabhata Organization has honored her with Aryabhata Award. She has many other awards from different organizations to her credit. 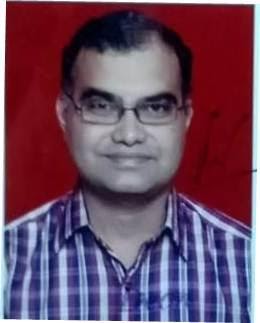 Dr. S. Muralidharan MBBS, MD, s/o Late P.R.Sethumadhavan, who was the headmaster at Government High school, Alandurai, Coimbatore. After the passing away of his father, he shifted to Bangalore and continued his studies under the supervision of Sri V.Nagaraj. He did his medical graduation at Govt. Medical College, Mysore. Under the guidance of Swami Jagadatmanandaji Maharaj of the Ramakrishna ashram, Mysore, he got inspiration from a junior monk and participated in many social service activities of the ashram and organized medical camps in rural places. Later on he did his post-graduation in Bangalore Medical College in 1990. He is actively involved in rural service wing of the Ramakrishna Mission, Bangalore catering to the needy and economically weaker sections of the society again under the supervision of the Swamijis for the last 3 decades. In association with Sri V.Nagaraj and other friends, he also joined the team of Sri Vivekananda Kalakendra. Since then he is actively participating in organizing different medical camps & all socio-cultural activities and working as Hon. Treasurer of the institution. 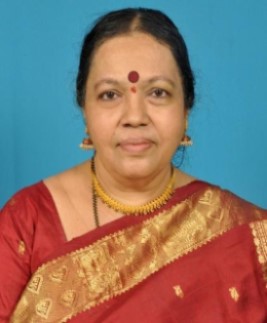 Smt. M.K.Jayashree a renowned singer in Sugama Sangeetha. She studied in MSS High School and completed her Degree in Music in APS College and learnt music through eminent Gurus. Fascinated by the Kannada Bhava Geethe, she continued her studentship with the most popular & melodious singer Sri. Mysore Ananth Swamy and gave number of musical performances throughout the country. After her marriage with Sri. V.Nagaraj, founder of Sri Vivekananda Kalakendra, she became the Principal and started teaching music. She has trained more than 2000 students in light music. She has more than 100 CDs to her credit. Along with her team, she has performed in many prestigious State, National & International Festivals. She is an "A" grade artiste with AIR Bangalore and Bangalore Doordarshan and her's was the first performance to be transmitted on Bangalore Dooradarshan. She is also the first singer to sing Jingles in many languages. Recognizing her services in Sugama Sangeetha, Govt. of Karnataka honored her with the prestigious 'Rajyothsava Award' in 1999 & 'Karnataka Kalashree Award' by Karnataka Sangeeta Nruthya Academy in 2015. In 2018 she was made the President of Akhila Karnataka Sugama Sangeetha Sammela at Sirsi & she has won the hearts of all music lovers through her melodious and wonderful performance. 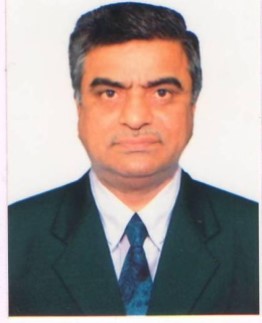 S.S.Prasad is the third son of Doctor & philanthropist, Dr.S.K.Subba Rao who was the Asthana Vaidhya of Sri Shringeri Sharada Math. Till his 94th year, Dr. Subba Rao served the society as doctor and Sri Vivekananda Kalakendra as President. Mr. Prasad studied BSc in Govt. College, Mandya and Completed his LLB in Vishveshwarapura College, Bangalore. After the completion of his studies, he started his own business. He has proved himself as a good and enterprising businessman. As his father, he is also helping Sri Vivekananda Kalakendra and the society with full moral support. He is a good listener and lover of music. He is associated in many organizations and serving society to the best of his ability. 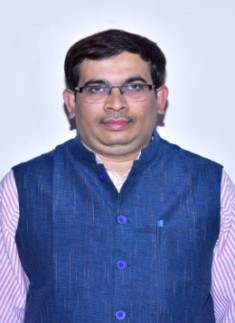 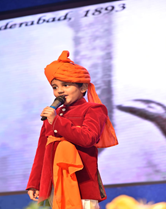 Master Daivik aged 10 years, a Child Prodigy is the son of Mr. V. Harsha(who works in Senior position in a reputed IT major) and Mrs. Swetha Harsha(who works as an Associate Professor in a reputed 'B' School). At this very tender age, Daivik has gained popularity across multitude walks of life like acting, playing keyboard, as a Mythology expert, chess master and swimming. Acting has been in his genes throughout. Daivik has performed in more than 700 programmes hitherto. His natural ability to perform has earned him many reputed stages across the country. He has donned the roles of Baby Krishna, Bala Vivekananda, Bala Subramanya , Bhakta Prahlada, Shivaji, Bhageeratha, Bhagat Singh and many other mythological, historical and inspiring personalities. He has performed in front of the First Citizen of the country-Hon President of India(at Pragati Maidan, Delhi) at the tender age of 3. He has also enthralled several other VIPs like Governor/Ex Governor of Karnataka, Chief Minister of Karnataka and other ministers. Daivik has also been chosen multiple times to welcome many Senior Dignitaries, Statesmen, Actors and leaders across walks of the society. At the very age of 3 , he has lent his voice for one of the popular Kannada Ballets which was performed in Delhi in front of a mammoth gathering. Daivik has already highlighted his presence on the small screen in umpteen appearances. Also, print media is not an exception and he was featured in 19 National Journals in Jan 2016. Also, Daivik was chosen as Swami Vivekananda Model by 'The Hindu' journal. Daivik delivers the famous' Viveka Simha Vani' Inspiring talk of Swami Vivekananda which has earned the hearts of many till date. He is a 'Go To Person' and an expert in Indian Mythology and can narrate any incident to the minutest detail. Daivik also is an accomplished Keyboard player and has picked up both Indian classical and Western ways of playing. Also, he has developed an uncanny knack in playing chess. Daivik is second to none in academics arena too. He can easily narrate the capitals of close to 100 countries of the world. Also he has developed a longing for logical questioning, reasoning, aerospace, aircrafts and number theory from his formative days. He is currently studying in Class at Sri Kumaran Children's Home , Mallasandra. The school management has been highly supportive of all his activities. In recognition of his great talent, THE REPUTED ARYABHATA CULTURAL ORGANIZATION has conferred the CHILD PRODIGY AWARD ON HIM on 18th May 2016 for the year 2015. At 5 years and 10 months, Daivik has been the youngest person to receive this honor. He has also received the Times Group Award and Karnataka MLA Award for the most promising talent in the constituency. Daivik has also been featured in various digital and print media hitherto. He was featured in 19 leading newspapers of the country on 20th Jan 2016. He has also appeared in 'Bhale Putani' (Whiz kid section) of Vijaya Karnataka(popular daily) 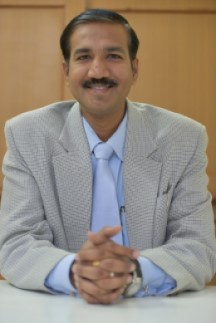 With 20years of experience in the field of Education, Entrepreneurship and Corporate. Has won the Best Business Plan award conduct by TiE 2009. Before foraying in Education, he has worked in MNC's and was also co-founder of Vishal Share Broker and Vishal Financial School. He is also associated with storiesbychildren.com. With the Motive to give back to society he volunteer's in activities of VKK and supports the organization in social media.